Maritime muscle-flexing in the Mediterranean Sea 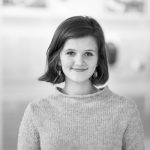 On 27 November 2019, Turkey and the Libyan internationally recognized Government of National Accord (GNA) agreed on a median line delimiting their respective continental shelf and exclusive economic zones (EEZ) in a ‘Memorandum of Understanding’ (MoU) which constitutes an international agreement (Art. 2 (1)(a) VCLT) despite its unusual title. By its virtue the States claimed extensive sovereign rights regarding the resource-rich Mediterranean Sea which is once more causing tensions in the region – in particular between Turkey and Greece. 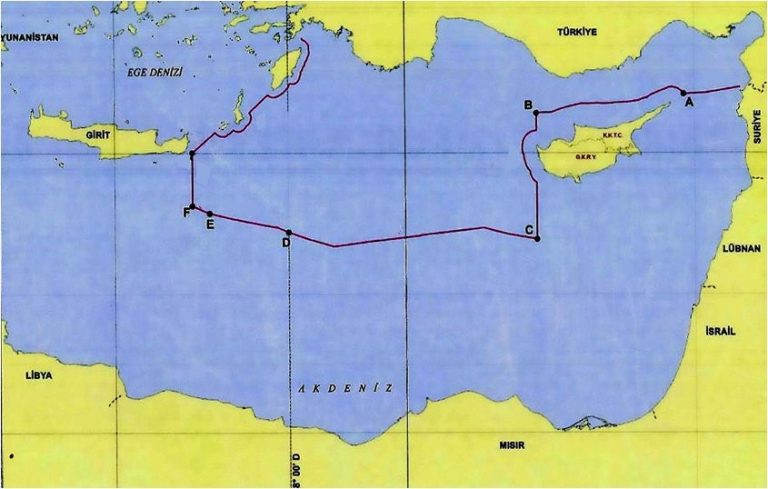 (posted on Twitter by Çağatay Erciyes, Director General for Bilateral Political & Maritime-Aviation-Border Affairs at the Turkish Ministry of Foreign Affairs)

For the purpose of delimiting their continental shelf and EEZ the parties agreed on an 18.6 nm median line (points E-F) resulting in a Turkish-claimed maritime zone conspicuously close to the Greek islands of Crete, Rhodos, Kasos and Karpathos and enclosing the island of Kastellorizo. The resulting sovereign rights that the coastal State exercises over the continental shelf are extensive: They include the exploration and exploitation of its natural resources (Art. 77 (1) UNCLOS) encompassing the oil and gas exploitation which is a significant economic interest for the Eastern Mediterranean States. The coastal State additionally has the exclusive right to authorize and regulate drilling on the continental shelf (Art. 81 UNCLOS). And even more: In the EEZ the coastal State enjoys sovereign rights relating to the waters superjacent to and of the seabed and its subsoil and exercises jurisdiction inter alia with regard to the establishment and use of artificial islands, installations and structures (Art. 56 (1) UNCLOS).

The agreement and the resulting distribution of sovereign rights between Turkey and Libya caused outrage among the neighboring States: One day after the MoU was concluded, the Greek foreign minister called the MoU a ‘flagrant violation of international law’. Similarly, Israel and Egypt condemned the MoU as illegal.

This instant and strong condemnation is fueled by Israel, Greece and Cyprus having planned the construction of a gas pipeline (‘EastMed-pipeline’) whose exact course is now by virtue of the MoU subject to Turkey’s and Libya’s consent (Art. 79 (3) UNCLOS). At least from the perspective of Turkey’s neighboring States, the MoU is but another Turkish attempt to strengthen its geopolitical position in the region. With regard to maritime disputes between the Eastern Mediterranean States, history has been quite eventful seeing the unresolved Greek-Turkish dispute over the Aegean Sea continental shelf, the dispute concerning the Imia Islets (1995/1996) and most recently the conflict concerning the Turkish drilling in territorial waters claimed by Cyprus.

Greek officials did not stop at informal condemnation but took measures further: The Libyan ambassador in Greece was expelled and a complaint was filed to the United Nations. The reason for this outcry by Greece in particular can be found in the fact that by delimiting the continental shelf and EEZ in the agreement with the Libyan GNA, Turkey now claims territorial rights over the same area in the Mediterranean as Greece.

Turkey’s Ministry of Justice substantiated its endeavor (in a statement deleted on their website, but available here) with the contention that the Greek islands in question do not create their own continental shelf and may not be the basis for establishing an EEZ. Consequently, no conflicting claims exist in the region affected by the MoU. From a legal perspective this is questionable since it runs contrary to the rule enshrined in Art. 121 (2) UNCLOS, incorporating customary law (Qatar v Bahrain, para. 185). It is additionally not in line with international jurisprudence, usually attributing islands at least some effect on the creation of maritime zones depending on the individual circumstances such as size, population and location of the islands in question (see Guinea v Guinea-Bissau Arbitral Award, para. 95; 1977 Award concerning the Delimitation of the Continental Shelf between Great Britain and France, para. 251; Continental Shelf Case (Tunisia/Libya), para. 129). As an alternative argument Turkey claims to be a ‘persistent objector’ to Art. 121 (2) UNCLOS (which is however contested according to Maria Lobo and Stefan Talmon). The status as persistent objector would result in the rule’s non-binding nature for Turkey.

Greece however seems to dismiss this status by stating that the MoU infringes upon sovereign rights, in particular ipso jure existent claims over the continental shelf (Art. 77 (3) UNCLOS) surrounding the aforementioned islands.

The situation regarding the EEZ however must be assessed differently: A coastal State’s EEZ does not exist ipso jure but its existence is subject to a constitutive declaration. While Greece reserves its right to declare an EEZ in the region affected by the MoU, it is important to note that it has not officially done so – making it legally non-existent. The delimitation of a potential Greek EEZ in the affected region would now depend on an agreement with Turkey and possibly Libya pursuant to Art. 74 (1) UNCLOS. Since Turkey and Libya have obviously not reserved a seat for Greece at the negotiating table in the past and Turkey is starting to create facts by announcing its plans to start oil exploitation in the region, Greece may see its position in that regard as considerably weakened. Since neither Turkey nor Libya are parties to UNCLOS, its dispute settlement mechanisms for disputes concerning the application of the dispute are not helpful to resolve this conflict. Turkey has moreover not recognized the jurisdiction of the International Court of Justice as compulsory which makes a peaceful settlement of the dispute using these institutional mechanisms difficult to imagine.

The rights provided by the law of the sea for the continental shelf and EEZ regarding oil and gas exploitation and the laying of pipelines in those maritime zones affect economic interests of potentially all Eastern Mediterranean States. It is also in line with the long history of maritime disputes between Turkey and Greece which have even caused the States to be at the verge of an armed conflict in the course of the disagreements concerning the Aegean Sea and the Imia isles. While an armed conflict is not in sight at this point, the maritime claims made in the agreement have already raised tensions in the region.

Even in light of these tensions, Greece, Cyprus and Israel have now signed an agreement paving the way for the construction of the EastMed-pipeline, seemingly ignoring the Turkish and Libyan claims in the region. Turkey promptly condemned this step, calling the signature ‘the latest instance of futile steps’ to exclude Turkey’s interests in the region. It then announced its plans to begin drilling in the area affected by the Turkish-Libyan MoU.

Considering the long-standing tradition of maritime conflict in the region and the resulting potential for escalation, the current developments are not to be underestimated. In any case, the MoU has already proven its negative effect on the stability in the region. Consequently, it is already failing the original purpose of delimitation agreements: Achieving legal certainty regarding the maritime zones in question and thus providing political stability. 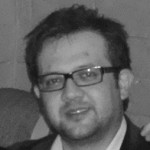 30. Mai 2014
Recht politisch
Aydin AtilganErdoganGeziPost-GeziSartreTürkeiTurkey
von AYDIN ATILGAN These notes were taken in the wake of Turkey’s local elections which were held on March 30th, 2014, and on the eve of the first anniversary of Gezi protests. AKP and Erdogan led the polls once again with 45% of voters in spite of corruption allegations, impeding…
Weiterlesen 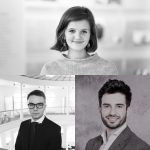